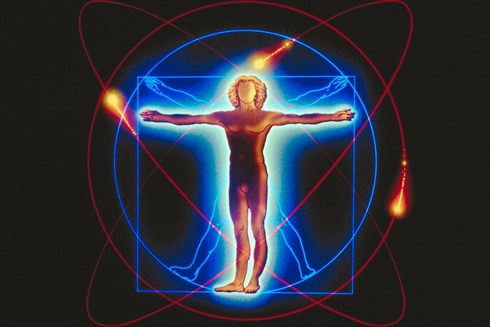 The living body, human or animal, radiates warmth and energy.

This energy is the life force itself and has many names depending on the country and culture. In India it is known as Prana, in China it is known as Chi and Native American Iroquois people call it Orenda. Many ancient cultures share a belief in some kind of animating spirit, soul or energy whose function is to give us consciousness, creativity and spiritual inspiration.

Vital Force is the energy, air, breath, wind, vital breath, vital essence – the activating energy of the universe. When Vital Force departs the living body, life has departed. This energy is also the essential life force of Mother Earth, the planets, the stars and the universe, and these sources of energy affect the living body. Everything alive contains energy and radiates it – it is the bio magnetic energy of the aura. Paracelsus believed that energy radiated between people, especially so when loves ones were apart even at great distances.

This Vital Force energy is the source of life itself and far older in concept and fact than any religious philosophy.

People and animals are more than physical matter. We have a dense physical body that comes equipped with our five senses, but we also have three other bodies known as our mental, emotional and spiritual selves. These invisible, non physical bodies are comprised of energy – Vital Force, and direct the state of the physical body. Our physical body has many energy centres, of which seven are considered most important. These interconnecting energy centres are called ‘Chakras’. It is our Vital Force then, which animates, guides, and balances the body on all levels in both health and disease. In other words, a disturbance in our vital force has a ripple effect into our physical bodies.  It is now commonly known that people suffering with addictions are often as a result of significant childhood emotional trauma.  Science is slowly catching up with this concept.

In health, the Vital Force keeps all parts of the body in harmony.

Disease then, is the response of the body to an assault on the Vital Force; in other words, when the mental and emotional energies are disturbed, physical disease is not far away. For example, a person suffering from arthritis, has most likely a well established pattern of self criticism, internalizing criticism and also critical of others.  This is an indication of an imbalance of his/her Vital Force.

The source of the pattern of any person or animal is the mental blue-print, the image of Self, which is unique to each individual and is the end result of all of that person’s interactions with the world.

For healing to take place, a healer should understand the interplay of energies between the mental, emotional and physical levels and that it is this ‘dance’ of the living energy (Vital Force) which must be brought into a state of balance to produce a wellness that can be reflected in the way the body is manifested.  Well selected Homeopathic remedies does this in a most beautiful way.  All aspects of self, being our mental, physical, emotional and spiritual (energy) bodies need to be in balance to be able to experience optimum wellbeing.

Not easy to do in this day and age!  Need help?  BOOK HERE